On Saturday June 2, twelve high school poetry slam teams from the District of Columbia, Maryland and Virginia came together for a battle of words at the Inaugural Louder Than a Bomb DMV Youth Poetry Slam.  The competition was fierce and the judging brutal. Only one DC team made it to the finals and that team won 1st place: our own Wilson High School slam team, Motley Society.  Congratulations to Reina Privado, Christopher McFadden-Gooding, Anastasia King, D’Mani Harrison-Porter, Mackenzie Hahn, and Asha Gardner for their excellence in writing and performance and teacher coach/sponsor – Pamela Gardner.

Louder Than a Bomb High School Poetry Slam Festival is an event that was started and has thrived in Chicago for over a decade. The program partnered with the DC Youth Poetry Slam Team, organized by Split This Rock, an organization that explores and celebrates how poetry can act as an agent for change. Jonathan Tucker, the organizer of the DC Youth Slam team, works with teens and teachers from high schools across D.C, Maryland and Virginia to begin poetry clubs to their schools. Tucker acknowledges the effort teams and teachers put in voluntarily to keep the clubs going.

“Students only perform for three minutes and listen the rest of the time,” says Tucker. “They need to listen and understand others who live across the river or outside their neighborhoods.” Another reason DC Youth Poetry Slam teams are successful are their ability to allow students to be valued for their voice, how they speak and what they have to stay. “Often in school, they aren’t valued in that way. Here, they are the boss and they make the rules. It is empowering for young people to have a room full of their peers and adults intently listening to them,” he went on to say.

Jonathan B. Tucker is a performance poet, facilitator, youth worker/advocate, community organizer and coach of the DC Youth Slam Team. He also works with Teaching for Change and regularly hosts open mics and slams at Busboys and Poets, BloomBars, The Fridge, and other community art spaces in which he also teaches creative writing and performance. 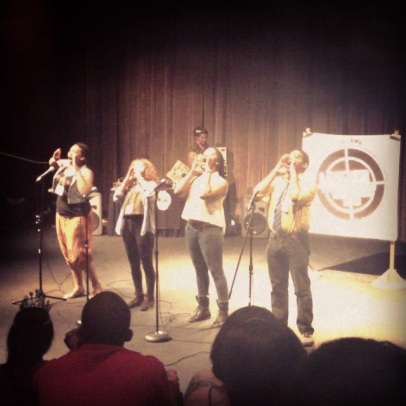 Students from Wilson High School performing for the crowd